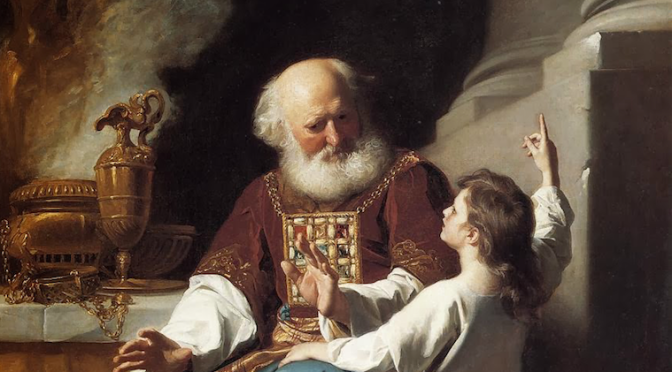 1 Samuel 3 is one of the chapters in the book that actually does speak about Samuel. (He isn’t even named in many of the chapters – including the 4 chapters immediately preceding his funeral in chapter 25. Although he does briefly reappear as a ghost in chapter 28…and then there’s 2 Samuel, which isn’t about Samuel at all…) As the last three verses indicate (1:19-21), the story is a prophetic calling narrative, showing how all Israel came to recognize him as God’s authorized spokesman.

Short chapter summary: God calls out to young Samuel late in the night, but Samuel misinterprets the voice as Eli’s, yelling to him from the other room. After making this mistake twice, his mentor Eli finally recognizes that Samuel must be hearing from God and advises him to speak directly to God next time. God then gives Samuel an oracle against his mentor Eli and his sons, which he tells Eli in the morning.

I really like this story. Not only is this a story that captures our imagination, but it’s a story with layers of meaning packed into it, if you look closely enough – if you have “eyes to see.” Here are some things that caught my attention:

v. 1: “The word of the Lord was rare in those days, visions were infrequent.”

Coming up in Part 2: thoughts from verse 2. I’ll leave the verse here for you to mull over – maybe you’ll see some of the connections that I’ll be pointing out in my next post. Reading over chapter 1-2 could help as well.

It happened at that time as Eli was lying down in his place (now his eyesight had begun to grow dim and he could not see well).

A prayer to end this post: God, speak to us! We want to hear from you. Use as your spokespeople. And if you already are speaking to us and revealing things to us, but we just aren’t listening or paying attention, unstop our ears and open our eyes, so that we can listen carefully, see clearly, and obey you. Help us to recognize all the ways you speak to us, and to be attentive to your words, so that we can help others to listen to you as well.

May it be to us according to your word,

The News that Changes Everything